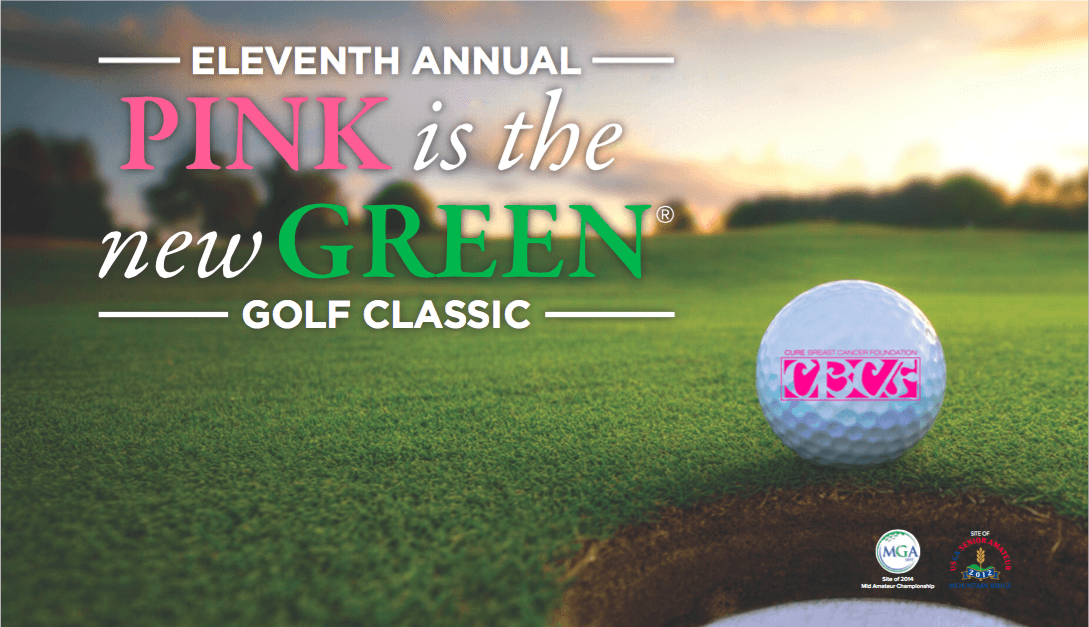 The Cure Breast Cancer Foundation’s (CBCF) 11th annual “Pink is the New Green®” Golf Classic once again exceeded its expectations with an impressive $650,000 in funds raised to support breast cancer research efforts under the direction of Dr. Larry Norton, Senior Vice President, Office of the President and the Medical Director of the Evelyn H. Lauder Breast Center at Memorial Sloan-Kettering Cancer Center.

Held yearly in June at the Mountain Ridge Country Club in West Caldwell, N.J., the golf outing is continually one of the most successful fundraising efforts of CBCF.  116 golfers participated in the 2018 Classic, which also featured an exciting $18,000 Chip Off and raffle drawing for a brand new Ford Mustang convertible.

The festivities concluded with a reception dinner where two hundred guests were addressed by Dr. Larry Norton, the foundation’s scientific advisor, and breast cancer expert Dr. Elizabeth Comen (also from MSKCC).  Dr. Philip Paty, a surgical oncologist at MSKCC with special training in cancers of the colon, also spoke to attendees.

“This year’s golf classic was one of the most prosperous on record thanks to the large number of participants, and the tremendous generosity of our donors, dedicated business partners, volunteers and community leaders,” said Andrew B. Abramson, Treasurer and Co-Founder of CBCF, a non-profit 501 (c) 3 organization. “The outing is unquestionably our keystone event and the perfect springboard to our fundraising efforts during the October Breast Cancer Awareness month.”

Since its inception in December 2007, CBCF has raised an excess of $7 Million through events such as the annual Golf Classic, walk-a-thons, fashion shows and other fundraising activities. CBCF donates 100% of its net fundraising proceeds to support the groundbreaking research of Dr. Larry Norton and colleagues at the Memorial Sloan-Kettering Cancer Center in addition to other national and international cancer research centers initially on the growth and spreading of breast cancer cells, also known as the Self-Seeding Theory and now on the new ideas and discoveries as a direct result of this revolutionary idea. CBCF’s research focuses on improving the understanding of not only breast cancer, but also other cancers.

Dr. Norton is a Senior Vice President in the Office of the President of  the Memorial Sloan-Kettering Cancer Center and the Medical Director of the Evelyn H. Lauder Breast Center and is leading the fight against breast cancer with his trailblazing work, and has discovered that cancer cell mobility and the interactions between the cancer cell and its microscopic environment are the key pathways to understanding and eventually eradicating breast cancer.

The Cure Breast Cancer Foundation (CBCF) is a Clifton, N.J. – based not-for-profit 501(c) 3 charity devoted to fund research on the growth and spreading of breast cancer cells, also known as the Self-Seeding Theory and now on the new ideas and discoveries as a direct result of this revolutionary idea at the Memorial Sloan-Kettering Cancer Center in Manhattan and other national and international cancer research facilities under the direction of Dr. Larry Norton, who serves as the Foundation’s Scientific Advisor.  The Founder and President is Carly Abramson.  Her father, Andrew B. Abramson, is Treasurer.

Related News
March 10, 2021 Q & A with Jack Linefsky: A Presidency Like No Other in the... When the NJAA gathered together in January 2020 for its annual membership meeting, there was no possible way we could have imagined what the... READ MORE
May 14, 2020 Value Companies Launches New Measures for Safety and Relief Value Companies Institutes New Measure to Ensure Safety and Provide Relief in Coronavirus Pandemic Value Companies, one of New Jersey's... READ MORE
May 1, 2020 Value Companies Institutes Leasing, Rental Safety Measures Amid... Clifton-based Value Cos. said Tuesday it has taken strides to ensure its leasing programs and rental procedures follow strict safety guidelines... READ MORE